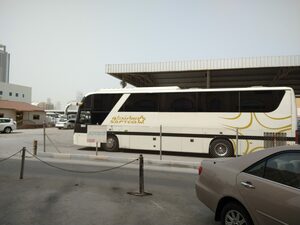 Crossing into Dammam Saudi Arabia by Bus from Manama Bahrain

Note: I made this crossing on March 7, 2022. At this point Muqueem registration, masks, vaccine and booster were required. Covid tests for arrival had stopped the day before. Once in country you had to activate an app called Tawakkalna to prove up to date immunity everywhere you enter.

I had a new Saudi Arabia Evisa obtained on a US passport. Processing was quick and took 4 minutes. I had to use an American Express card to make payment go through. Get your Saudi Evisa direct with no middleman here: Saudi E Visa.

I made a booking on the SAPTCO website. Unlike many Saudi websites (including some airlines) my US Visa card worked! It cost 95 SAR ($25USD) from Manama to Dammam.  The website worked perfectly. I even had to change the date on my ticket and did this quickly on the website. Tickets are changeable and refundable.

This crossing was very simple. I have crossed borders by bus many times throughout the world and this was no different. If you are not use to crossing borders by bus the following will help you know what to expect.

I Ubered from my Manama hotel to the SAPTCO office. Uber in Bahrain uses an actual taxi, it is just processed through the Uber app. The bus leaves from in front of the office at noon and 10:30pm not the larger bus station a few blocks away.  The office is in Uber and Google Maps in the correct location as “SAPTCO office”. The taxi drivers in Manama usually speak some English and the location of the “bus to Saudi Arabia” is known.

I went inside to check in. They wanted to see a print out of my evisa and ticket. You will need a print out of your visa to show twice in this process. I handed over my COVID arrival information, the Muqeem registration print out, but they were not interested. Required PCR testing had stopped the day before so I did not have show a test.

I arrived early. There is a waiting room and a locked toilet in the office available for use. I was told to go wait on the bus. With only about 8 passengers seats were not assigned.

The bus is a normal coach. It did have a toilet.

It was about 30 minutes to the island on the causeway where border formalities take place. No further photos allowed.

First you go in and present your passport to Bahrain and are quickly stamped out. Back on the bus you drive forward a bit. Get out again and check into Saudi Arabia. If you have a “new” visa meaning your evisa has not been activated on a previous trip you will be shown to a different queue. Here they will take your fingerprints and photo. Back onto the bus we pulled forward a bit and it was customs time. All bags came out from the bus and underneath and went through an x-ray. This took the longest as they had the driver open all sorts of compartments.  Do not worry about any of this people will point and motion you along telling you where to go.

We arrived at the bus station in Dammam around 2:20, ahead of schedule. The drive is only about 75-90 minutes. How long the bus takes will depend on the crowd at the border. It was slow the day we crossed.

The bus station was busy. There is a ladies waiting room. There is no ATM or money exchange. There are kiosks for drinks and snacks. Lots of taxi drivers were shouting offers of their service from outside the gate. It took a while but an Uber accepted my ride after a few minutes. My alternative was going to be to negotiate via Google Translate a taxi to the hotel with a stop at an ATM. Uber was much easier it charged my US credit card and dropped me where I needed to be without language barriers. Careem an Uber alternative used many places in Saudi Arabia is not available in Dammam.

Why did I take this route?

This was an easy cheap way to get into Saudi Arabia. It is also an interesting route as you get to traverse the 25km bridge called the King Fahd Causeway.

I flew into Bahrain on Emirates. I had never been to Bahrain and wanted to see it, plus at the time they were not requiring a PCR COVID test whereas other countries were. From Bahrain to Saudi the flights were about $300USD one way. There were no budget airlines. This bus was quick, and cost $25USD (95SAR). There are good and reasonable hotels in Damman and Khobar and domestic flights from Dammam airport are much cheaper than international ones.

Dammam had an interesting Culture Center a nice Corniche to walk and was a good spot to adjust to Saudi, get the Tawakkalna app working etc.

It also appears you can Uber this route for about $100USD. This could be a good choice for more than one or two people. Plus you wouldn’t have to deal with getting to and from the stations.