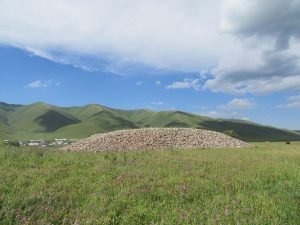 Tamerlane Stones- A Mysterious Pile of Stones in Kyrgyzstan

Nobody knows much about this man made pile of stones in a field on the Eurasian Steppe. There is no known date or reason for this mound. It is near to a burial complex of small mounds called San Tash. Those burial sites date from 600-100BCE. The large Tamerlane Stone mound is best known for an unsubstantiated story.

The name of the pile comes from a legend involving Tamerlane (aka Timur) a Conqueror and Military leader in the 1300s. For those unfamiliar that description does not convey the massive success of Tamerlane. He conquered and held land from Mongolia to the Mediterranean. He is considered a brilliant tactician, but his campaigns resulted in many deaths.

The story of the stone pile is that Tamerlane told soldiers to bring a stone into this field and pile it up as they marched through on their way to a campaign. They were then to take a stone with them on their way back. This pile represents the unclaimed stones and therefore the large number of soldiers who died.

I was fascinated to learn more about connection to stones in this area, as well as a modern use to help fight heroin addiction discussed in a NY Times Article Heroin Addiction Stones. In modern day 5000 addicts have brought stones to a site outside of Bishkek.

The Tamerlane Stones are near the San Tash Pass between the Kazakhstan border and Karakol. I was traveling to Karakol from Kazakhstan so arranging a stop here was easy. The driver taking me from the border to Karakol did have to stop and ask locals for exact directions, but it was known to those living in the area. Since there is no public transportation, unless you are hitchhiking it should be easy to ask to stop by. There is not much to see so it will not be a long diversion.

I used a company called Visit Karakol for some touring in the area I could not do on my own. I was very impressed with this company. The owner is fluent in English, extremely knowledgeable about the entire Stans area, and has an excellent understanding of what foreigners like to see and do. He runs a solid operation with competent drivers and guides and charges fair prices.