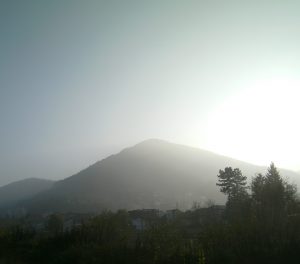 Visoko: The World’s Largest Manmade Pyramid or Just a Hill?

Having visited I still don’t know the answer!

I took a public bus to and from Sarajevo to Visoko, Bosnia and Herzegovina to see a pyramidical shaped feature. Some say this feature is the world’s largest pyramid and some say it is a normal mountain. This was 2013 and there was little signage in Visoko and nothing was organized. It was an interesting day and must be included in my collection of mysterious places despite the weather and uncertainty.

The top was very foggy. The only people encountered were three foreigners at the peak napping, rolling, crouching, and saluting the sun. Presumably they were absorbing mystical energy. I tried to be more metaphysical and also absorb the energy. I stayed for a while, the fog did clear some.

After the pyramid I went to find the tunnel. This is a tunnel that runs into the Mountain/Pyramid. It was used in WWII but is mysterious as nobody knows who built it. It is theorized that the ancient people built it 12,000 years ago when they built the pyramid.

Going to where the tunnel was on my map took me to a factory called KTK. After non verbal communication, a man with a flashlight appeared. He lead us through the compound, down by the river and into a tunnel/cave/hole in the hill.

Inside the tunnel we walked around as the guide enthusiastically showed me white deposits, orange deposits, and crumbling walls. There was a very old stone wheel. He spoke no English, I speak no Bosnian, I spoke zero Russian then, I was not sure what was being said. Hopefully nothing was toxic. There is likely interesting history here that has nothing to do with ancient people.

Maybe. It did take a whole day. I travel for long periods and had the extra time.

Do you find fake archaeology interesting? I do. Even a fake pyramid is interesting to me. The idea that in 2020 we could argue about if this is man made is fascinating. It reminds me a lot of the Native American ancient mounds I am cataloging here but on a larger scale. These mounds, which nobody argues were manmade, also require a lot of imagination. I would certainly return should they ever excavate and find proof of a pyramid.

Are you a mystical energy magnet? Whereas I find the subject interesting, I am in not a person who channels mystic energy or vibrations. If you are, by all means go determine if this spot “feels” special. Report back to those of us who don’t have that sensitivity.

It may be easier now. I did not have phone data, google translate, and the site was not popular. There was little information and nobody in town to explain or point the way. It sounds more visited now. Obtaining more information or having an English speaking guide would enhance the experience if you are going for background/historical reasons. If you are going to absorb the energy then by all means buy a bus ticket and walk towards the top and see what you think.

You may need a car, guide, or tour to get the best photos or viewpoints. It was difficult to find good views of the pyramid on foot. Most of the images online seem to be taken by drone or from another peak.

The bus I took a few days later to Banja Luka passed back through Visoko and I had a good view of the pyramid from the road. Unfortunately photos weren’t possible.

Here is a photo of mountains in Bosnia Herzegovina seen when from the train to Sarajevo from Mostar. They look pyramidal too?