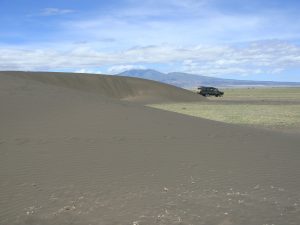 In Tanzania there is a crescent shape pile of sand that moves about 50 feet a year. The sand clings together . This allows the entire dune to move instead of dissipating and blowing into the plains.

The mysterious part is how it came to be here, alone and unique. The volcanic sand itself it not magical, it is magnetic. Still this is an odd occurrence that I have not seen elsewhere. Local Maasai legend has the sand originating from a nearby sacred mountain.

I visited the sands while on a Tanzania Safari. This was on the day driving between Ngorongoro crater and Serengeti National Park. The sands are near the Olduvai Gorge. The Gorge is a site where early humanoid skeletons (1.9 million year old) have been found. It is a very  important  paleo-anthropological site. There is a small museum by the Gorge than many Safari itineraries stop at.

The Maasai people consider the shifting sands sacred. Walking around them is okay but you should not climb them. This also protects the sand pile which is not huge.

The only practical way for foreigners to visit the shifting sands is with arranged transport, likely the same 4×4 you are taking between and around the parks. There is no official entrance or anything. It is literally a pile of grey sand.

I had arranged a private safari and requested we add a stop at the shifting sands when planning the itinerary with the local operator. The sands are known, but less visited than the gorge. There were many safari trucks at the gorge but we had the shifting sands to ourselves.