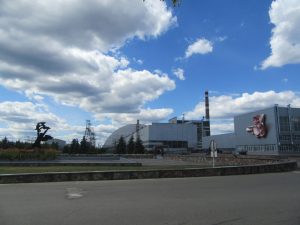 The excellent HBO miniseries has me thinking about the day trip I took to Chernobyl. Yes, you can visit Chernobyl. Reportedly the radiation I was exposed that day  was less than that on a transatlantic flight. A new confinement shelter covers the original sarcophagus around the reactor.  With this new building, and the clean up focused on the area around nuclear reactor 4, the reactor actually has some of the lowest radiation readings in the area.  You can now visit close to the reactor that exploded. 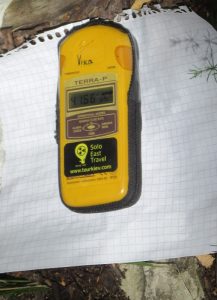 You can rent a geiger counter from the tour company  if you want to check your radiation exposure. The Geiger counter did alarm in certain places. Usually some random spot on the ground where cover  debris had blown off.  It could also indicate something was buried. Some areas of high radiation were marked, some not.

How to Visit Chernobyl 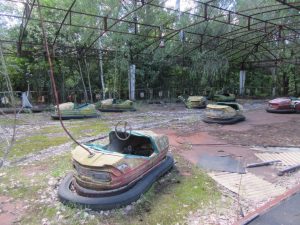 You must hire a tour company. You cannot go on your own. You can pay for a private tour but you cannot just rent a car and head to Chernobyl. The companies that go are liscenced and limited. A permit in your name is required and must be issued in advance. There are many stops and checks where you present your passport and permits.  Certain areas are still very radioactive so you need someone to lead you. There is no reason to try and get around this. Tours start around $100 for an 8 hour plus day with lunch, lots of explanation and an English speaking guide.

Tours leave from Kiev. Kiev is a great city with so much to do and worth several days visit. Surprise note: we had some of the best Vietnamese and Chinese food we have had anywhere in Kiev!

We chose  https://www.tourkiev.com/  for our Chernobyl tour. They had good reviews, and they allowed payment by credit card. Some companies required a payment the day of in US dollars cash. I was traveling for months prior and did not have US dollars. I did not want to buy them with local currency. Everyone met for the tour at a central location, no driving around for an hour picking people up, which I prefer. We were happy with the company and have recommended them to people since.

The Russian listening station named Duga is also visited on a Chernobyl day tour. It was also named Woodpecker because of the noise it would make as it impacted short wave radio devices throughout the world in the 70s and 80s. Long rumored, or denied, it was built to  to detect ballistic missiles. It is the subject of many conspiracies, and its effectiveness is debated.

A train track that has grown over with trees. It is used rarely which allows it to maintain a tunnel appearance.   I visited in Summer.

The Tunnel of Love is in Kevlan which is a small village.  The closest town/city is called Rivne. I took an overnight train from Odessa  to the town of Rivne and checked into the Mir hotel.

I walked over to the bus station  and asked around for a bus to Klevan. There was one waiting at the station.  After about a half an hour we were dropped a short walk to the tunnel of love. We had marked it and were following along on maps.me to be sure. We followed this procedure back to Rivne afterwards. It was pretty straightforward once arriving in Rivne.

The next day I took the train to Ternopil from Rivne. Staying in these smaller towns that are not popular with international tourists was interesting. It was nice to get outside of the better known places Odessa, Kiev, and  Lviv. I have visited all these towns. They are great and worth seeing. A side trip to Rivne was just a different look at Ukraine.